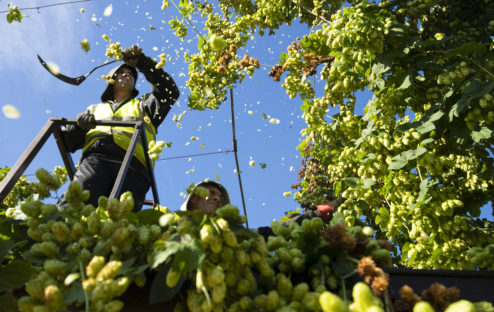 The hop harvest is a busy and frenetic time of year here at Stocks Farm. There are the couple of weeks before picking starts when the anticipation is palpable. Richard and Ali are often seen crossing hop yards, rubbing the hop flowers and checking for aromas before a plan is drawn up and the start date is confirmed. This year, hop picking commenced on 28th August.

We started with Goldings, the oldest hop variety here on the farm. The rumble and hum of The Bruff picker being started up again after it’s long break was a familiar returning sound – and it meant that the winter maintenance had worked to keep this machine in top condition.

It wasn’t long before hops began to arrive from the hop yard and The Bruff was put to work. We are incredibly lucky to have the same returning seasonal workers each year and they all took up their familiar places on the machine to hang bines, de-tangle laterals and ensure everything ran smoothly.

The field team were also hard at work, systematically cutting the bines down and working their way down the rows, shrouded in darkness from the heavy crop and leaving a cleared hop yard behind them.

Some of our hop varieties had a bumper year this year – a welcome crop after the drought affected the yield last year. The warmer weather in September meant that some fine tuning on The Bruff was required – the hops go through better if they have that recognisable autumnal dampness to them. The Bruff also had to be slowed for some varieties as the weight of the crop on the bine was too much to process at the normal pace. A day was lost with a part breakdown, but it coincided with some heavy storms, so we think the field team might have been very happy about this!

The last variety to harvest was one of our newest varieties, Olicana, which took us all the way through to 8th October. Harvesting six days a week for just over six weeks is hard work for the team, so once the picking was over, we celebrated with pints of beer from The Hop Shed Brewery, and a Pig Roast. The afternoon progressed and there was dancing and much merriment – the team even managed to persuade Richard and Farm Manager George to join the dancing! It was a wonderful way for us to show appreciation to the team for getting through another hop picking season.

The anticipation is palpable again at the end of the season for a different reason. As the baling concludes, everyone is excited as the weights and measures are completed. How far off were the estimates? Was the season as good as we had hoped? This year, we picked and baled 1,013 hop bales. A great year which is now proudly recorded alongside the historic figures in the hop drying shed.

The photos and videos on this post were provided by Rod Kirkpatrick from F Stop Press Ltd.